The Big Sit! is an annual, international, noncompetitive birding event hosted by Bird Watcher’s Digest and founded by the New Haven (Connecticut) Bird Club. Every team that observes the year’s “Golden Bird” has a chance to win $500. Every year, bird watchers from around the globe unite on this special day by participating in this free event, open to any person and club in any country! The Big Sit! is sponsored by Swarovski Optik.

How this works is you create a real or imaginary circle 17 feet in diameter and Sit, stand, or wander around inside the circle for 24 hours, counting all the bird species you see or hear. Participants are allowed to come and go from the circle—especially for the purpose of bringing food back into the circle, and the circle need not be be occupied for the entire 24 hours. Then submit your findings. 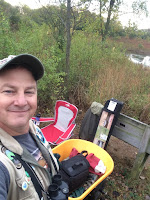 I arrived at Havenwoods around 7:50 AM on Saturday.  There was no other vehicles in the parking lot as I unpacked the back of the (IBIRD) SPT (Silver Pickup Truck).  The weather was completely overcast but a still south wind had the temperature at 66 degrees.  It had rained the day before so the parking lot was wet and the trail to the circle was damp.  I unpacked the wheelbarrow and began to survey the area.  Approximately a dozen Mallards were on the pond, feeding and paddling about.  The next birds I saw were American crows on the far western edge of my vantage point over the treeline.  The were swirling and battling the wind and making a racket I could hear from the circle over 1000 yards away.

Robert Massey joined the circle at around 9:30 and unpacked his gear.  It was nice to have a fellow birdwatcher in camp.  Double the ears and eyes is a great security blanket, particularly when it comes to rendering a positive ID on a bird species.  With the wind blowing quite stiffly and in gusts, the birds seemed to keep very low and did not venture forth to any great degree.  The rain began around 11:00 AM and the Coleman tent was put up by the two of us.  It rained on and off over the next few hours before stopping entirely for a bit.  The highest the temperature got was 75 degrees.  Then at around 3:00 it began to rain harder, and with it the temperature began falling as the next storm front moved in. 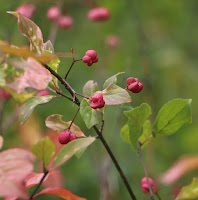 We also passed the time exploring the various flora that surrounded our circle.  Most notably was the discovery of a small pinkish multi-lobed berry hanging from a low shrub.  Neither of us could identify it at that time; nor could a Havenwoods "volunteer" who drove by in a small green electric utility cart.  The man and his passenger had been out remediating the invasive Teasel.  I did some research for this blog and found out that it is called Euonymus atropurpureus or American Wahoo.

By far the most predominant bird species was the Bluejay. Groups of 2 to 4 would fly back and forth from our edge of visibility,  they seemingly had a mission.  Several times I saw them with something in their bills as they returned to the closer side of woods near us.  It got so that we could easily identify their silhouettes without the aid of binoculars.  We birded until 4:45 PM and tallied our total species list for the day:  23 species.  The rain slackened up just a bit so we packed up everything again and headed for the parking lot with drizzle falling down.  We left at 5:05 PM chalking up nine hours of birdwatching for this year's Big Sit.

Posted by Unknown at 1:23 PM No comments:

Readers of Pure and Total "BS"